The award winning Mackintosh Choir Scottish Charity Number SC049999 is an open access, non-audition community choir based in the Kelvindale area of Glasgow. 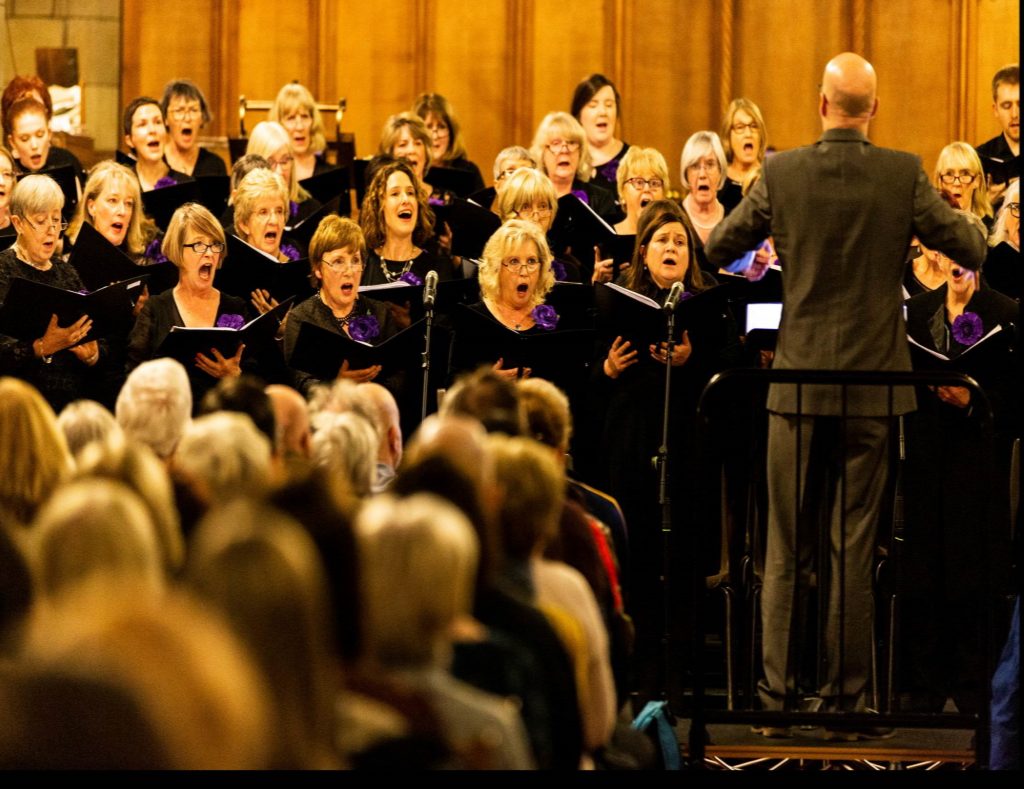 The choir was established by a small enthusiastic group in October 2011 with support from the Charles Rennie Mackintosh Society and Queen’s Cross Housing Association.

The choir’s first public performance was at Christmas 2011, in the beautiful surroundings of the Charles Rennie Mackintosh Church in the Queen’s Cross area of Glasgow. For the first few years the Mackintosh Church was the venue for rehearsals, concerts, singing workshops and other musical events, bringing to the area an excellent opportunity to engage with the arts. In 2016, due to the growing size of the choir and the physical constraints of the Mackintosh Church as a performance venue, the choir moved to the much larger St John’s-Renfield Church in Kelvindale, Glasgow.

In 2015 the choir was highly honoured to be conducted by the world-renowned composer, John Rutter CBE, as we sang his arrangement of “Feel the Spirit” at our summer concert. We were even more honoured when he agreed to be the choir’s Patron.

As well as giving performances on its own, the choir has been invited to join with other Glasgow Choirs for a variety of concerts and performances in the Glasgow City Halls, the Glasgow Royal Concert Hall, the Bandstand in Kelvingrove Park, Glasgow and the Bandstand in Queen’s Park in Glasgow. In 2017, the Choir was invited to give musical support to the National Theatre of Scotland in its production of ‘The Submarine Time Machine’ in a week of outdoor performances along the towpath of the Forth and Clyde Canal from Spiers Wharf to Firhill Football Stadium in Glasgow. In summer 2020 we would have been joined at our summer concert by The Placer Pops Chorale from California. Unfortunately, this had to be cancelled due to Covid-19.

Our repertoire is eclectic and includes sacred music, secular classical, musical theatre and modern pieces. None of this would be possible without our wonderful, encouraging Musical Director, Paul Keohone and our Accompanist, Gordon Cree and Associate Accompanist, Robert Melling.